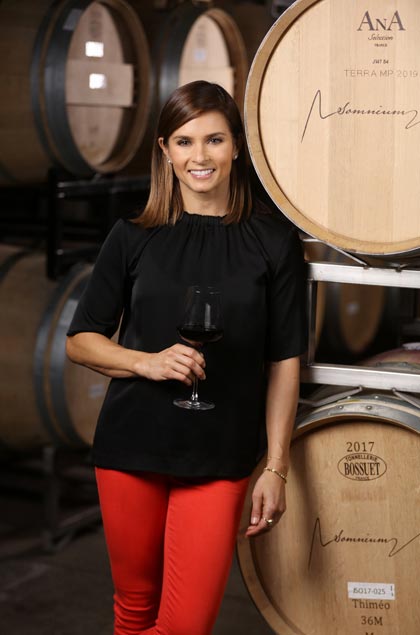 Somnium proprietor Danica Patrick is admired by millions as a trailblazer and especially as a role model for young people, women and men alike, aiming to rise to challenges and pursue their own passions.

As a serial entrepreneur, she has launched successful ventures from apparel to wine. A magical visit to Napa Valley in 2006 inspired her to establish her own fine wine estate on the flanks of Howell Mountain. Today, her Somnium brand crafts a portfolio of exclusive wines from that estate and select Napa Valley vineyards, while her French label Danica Rosé offers an elegant taste of the Provence region. Recently she debuted her new lifestyle brand VOYANT by Danica, a home scent collection utilizing the functional power of fragrance through essential oils and other natural ingredients.

Danica Patrick continues to prove her multimedia appeal: as a television sports analyst and commentator, as author of the self-help book Pretty Intense, and as host of her weekly Pretty Intense podcast, interviewing top athletes and celebrities. From her racing days to the present, she remains a popular personality who’s appeared in music videos and commercials, including a record-setting 14 Super Bowl commercials, and has lent her voice to videogames and cartoons such as “The Simpsons” and “South Park.” Equally recognized as a savvy businesswoman as well as a pop culture icon, Danica has landed on numerous “Favorite Female Athlete” and “Most Powerful Women” lists, including Time’s “100 Most Influential People.”

Danica Patrick began her singular journey at a young age. As an IndyCar then NASCAR driver, she broke barriers and set records as a fierce competitor in the traditionally male-dominated world of motorsports before retiring in 2018. Danica garnered international acclaim by finishing fourth in her very first Indianapolis 500, going on to achieve another first as a female racer with her victory in the IndyCar Series Indy Japan 300 race.

Her unique experience, perspective and charisma makes Danica Patrick a coveted speaker for a breadth of corporate, lifestyle, entertainment and sports-related events, from motivational engagements to entrepreneur gatherings.